Amongst the ‘zippers’ were people diagnosed with lymphoma, support group attendees, family members of people with lymphoma and Clinical Nurse Specialists (CNS) who support patients with lymphoma. They all had one thing in common: they want to help everyone affected by lymphoma get the best possible information, support, treatment and care. Thank you so much to everyone who took part, we are so grateful for the support!

Bill Ramsbottom and his son Matt took part in memory of their son and half-brother, Allan, who died from lymphoma in 2011 aged just 20. Bill says: “At the age of 72, friends said I was brave to do it, but I felt humbled by a lymphoma colleague and fellow zipper doing it at 81 years old. I cannot think of a better cause to raise funds for than Lymphoma Action.” 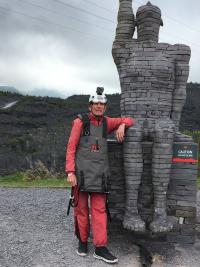 Glen Duckett and his uncle Ralph (aged 81 - pictured) - a member of our support group in Colne - also took part together. Glen says: “It was great to support Ralph and take part in the zip-wire alongside him. I'm so thankful that he had the support and care from Lymphoma Action when he needed it; and now he can be such a positive role model for other people with lymphoma and related conditions.” Ralph says: "It’s two years now since I finished my treatment and I just want to give something back – raising money from the zip line will help me do that.”

Chris, a member of the Lymphoma Action support group in Nantwich, says “It was a fantastic experience to be a part of this event. I have personally found immense value in the support and friendship of others via Lymphoma Action. This has been through both the brilliant local support group and also from the informative forums online. The work they do is amazing and it is great to be able to do something towards helping others with the same diagnosis.”

Nurses Ruth Jackson and Debbie Johnson from Whiston Hospital and The Lilac Centre in St Helens Hospital also took part - and they not only roped in their sons, but also the nurse manager at the Lilac Centre too. Ruth says: “I’d like to thank Lymphoma Action for asking me to take part. Never in a million years would I have taken on the task as I'm terrified of heights!  However, I managed to overcome that fear with an amazing group of people. I was surprised to even see one of my patients there; it was very humbling and reminded me why I was setting out to support Lymphoma Action.”

Natalie, who had her last treatment for lymphoma just 15 months ago, also took part and says: “I feel so lucky to be here today. My zip line experience was amazing! Something that I would recommend and the best feeling of feeling alive!”

Team lymphoma are taking on the zip line challenge again in May 2020! Find out how to get involved here.